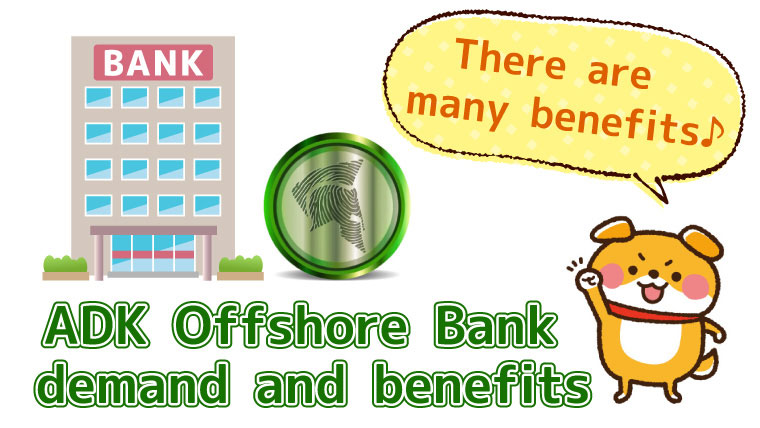 neokichi
I will explain the advantages of using offshore banking and online banking, the main project of cryptocurrency ADK (Aidos Kuneen).

What is an offshore bank?

neokichi
An offshore bank is an overseas bank that is not your own country, and is also called a tax haven.

myako
Does it have any merit?

neokichi
There are various benefits. I will introduce from the next item.

Will you save tax?

Taxes vary depending on national laws. Here we introduce a case in Japan

If you have heard of offshore banks, many of you may have the following image.

You can create an account at an overseas offshore bank, put your assets into it, and you don’t have to pay the taxes you earn on interest and investment.

This is a big mistake. (in Japan’s case)

Under the current Japanese law, if you open an account with an offshore bank and generate interest and profits, you will be required to report it to the tax office because you will be taxed. In other words, if you do not report (final tax return), you will be charged additional taxes.

neokichi
If you live in Japan, you have to report all the interest and profits to the tax office regardless of which bank you use around the world, including offshore banks.

myako
After all, tax is incurred.Then there is no merit?

neokichi
There are benefits! I will introduce it!

neokichi
That’s right ♪ Of course, if you live in Japan, you will also be taxed on the interest rate, but even if you consider it, it is a very high interest rate.

Not only Japanese but people all over the world apply to this risk.

myako
Is there a country bankruptcy?

neokichi
The Zimbabwe Republic in Africa has became Hyper inflation since 2003. 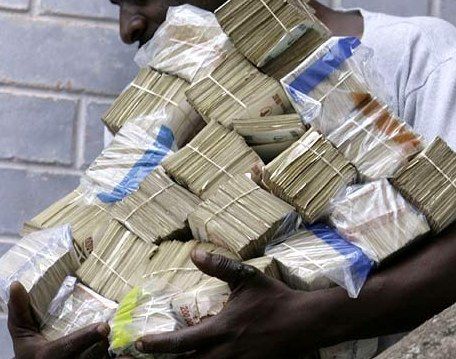 neokichi
When it comes to hyperinflation, having so much money has little value. . .

myako
The banknotes I have are worthless. . That actually happened.

This may be an extreme example, but having full confidence in your home currency is somewhat risky.

It is unclear what will happen to Japan in the future. The national debt is over 1000 trillion yen. One day suddenly a deposit blockage may be carried out.

myako
What is a deposit blockade?

neokichi
Freeze your bank account. And tax on the deposit amount.

Deposit blockade in Japan actually took place in 1946. Due to financial difficulties, measures were taken to prevent the withdrawal of more than a certain amount of national deposits.

In other words, Japan has forcibly closed national deposits and repaid debts. At that time, a property tax was applied, and those with cash more than 100,000 yen (about 900 dollars) were forcibly collected at a rate of 25-90%.

myako
Deposit blockage means that my money can’t be withdrawn and I can get taxed! ?

neokichi
That’s right.I don’t know if the deposit blockade will happen again in Japan, but the possibility is not zero. And not only in Japan but also in other countries around the world, deposit blockages have actually occurred in the past.
Past deposit blockade

neokichi
So, as a risk measure to protect your assets, you need a measure that has a currency other than your own currency and an account overseas.

As a countermeasure against such risks, it is recommended that you do not own assets in your own currency, but distribute them in dollars, euros, stocks, bitcoins, ADK, etc., and use multiple banks for storage.

Offshore banks are characterized by high confidentiality and high security. In other words, it is difficult to know that your government has an offshore bank account.

By doing so, for example, even if the government goes bankrupt, the information on the offshore bank account is unknown to the government, so you can protect your assets.

Although it is an offshore bank, in recent years a system to disclose accounts (AEOI) has been established. This means that when you create an account between countries that are members of AEOI, the account information is automatically sent to your country.

AEOI is an abbreviation for “Automatic Exchange of Information” and means an automatic information exchange system for financial accounts.

AEOI knows your offshore bank account and the government knows how much balance you have.

myako
Even if you use an offshore bank, do you mean that AEOI will share your account information with the government?

neokichi
I noticed it well! So don’t you think that wealthy people are looking for an offshore bank that is more confidential and safe to store assets?

myako
think! ! Are there any offshore banks that are highly confidential and protect assets well?

myako
That means that even if it is requested by the government, it does not disclose account information!

neokichi
That’s right! ADK is trying to create an offshore bank with high anonymity and safe deposit of assets.

The project is progressing so that ADK can acquire and consolidate banks from non-AEOI member countries and open online accounts via online banking.

In other words, since it does not flow information of the financial account, it means that anonymity is very high and assets can be safely protected.

Of course, ADK’s offshore bank will also perform KYC (document verification for identification), but will not disclose that information.

ADK is used as a means of remittance

Even if you open an offshore bank account in a non-AEOI member country, you will know where the money was sent from the money transfer history.

Since ADK is highly anonymous and untraceable, you can use ADK when sending money to protect your privacy and keep your assets safe. 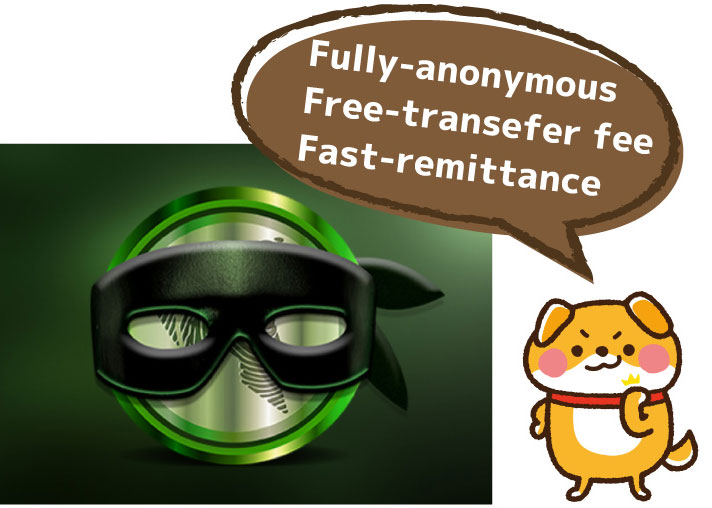 Since ADK uses DAG technology instead of blockchain technology like Bitcoin, remittance fees are free.

Here’s a quick introduction to how ADK sends money to offshore banks.

ADK offshore bank will also issue a debit card. It can be used all over the world except some countries, and the used amount is drawn from the offshore bank account.

Currently, the offshore market is said to have 30trilion USD.
In the case of a normal offshore bank, it is usually impossible to open an account without going to the local. Furthermore, the demerits are conspicuous now that the account opening itself can no longer be done in the first place, the account management fee is high, or if the account is not used, it will be frozen.

Meanwhile, non-AEOI member countries, and even online banking can open accounts remotely, anonymity is high and untrackable, manage assets safely, and I think we can expect considerable demand if the interest rate is high at 10% .

myako
The wealthy are using a bank where they can have their assets safe and secure. And ADK is trying to make the strongest offshore bank.

neokichi
Yeah! ADK offshore banks are likely to be in high demand.

ADK applies for “Badoer Capital” banking license in Dubai! Joint operation with a bank in Singapore! 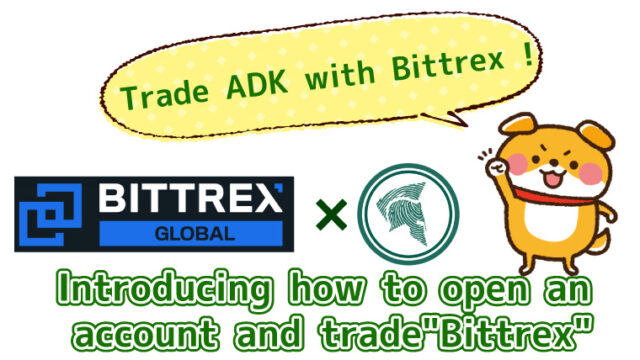 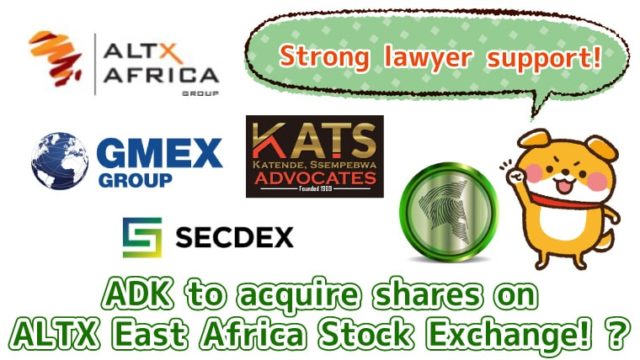 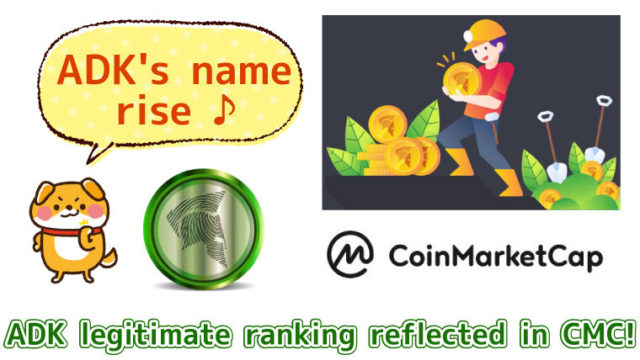 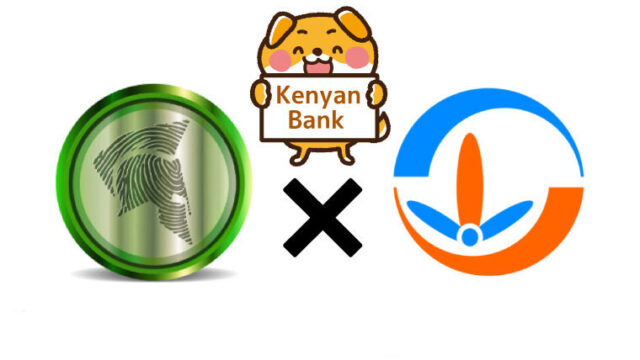 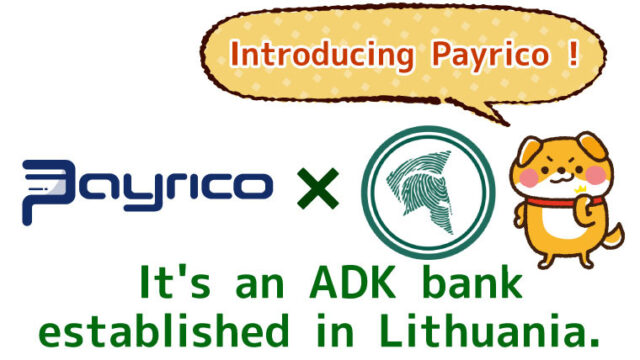